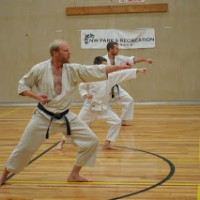 Eric Henry was born in Walnut Creek, California. He moved to Bellingham in 1997. After completing his BA in Biology at The Evergreen State College in Olympia, Washington, he further purused his Masters in Education at Western Washington University in Bellingham with a focus on Science and Environmental Education. He has been teaching science at Mt. Baker Junior High and High School since 2000.

Eric started his martial arts training at 7 years old when he was enrolled in Judo at the Boys and Girls Club in Bellevue, Washington. He began wrestling at 14. Once high school had completed, Eric discovered Shotokan karate and became enamored with it. He practiced for a few months until he moved to Olympia to begin college. He continued practicing on his own while searching for a Shotokan dojo. Finally, in 1993, Eric met Eddie Goral, a student of Mr. Ohshima. After visiting an SKA practice, he knew he had found what he’d been looking for. Eric established the Bellingham dojo in November of 2005. The dojo was moved to Birch Bay in 2013. 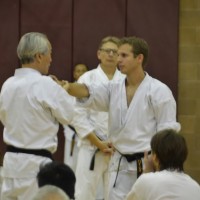 Jesse Haines was born in 1983 in Hartford, Conneticut, and has lived in Bellingham since 2013. Jesse attended Butler University in Indianapolis, Indiana from 2002-2009 where he obtained is PharmD. Jesse began his professional career at Indiana University Health where he worked as a staff pharmacist from 2009-2011. He currently works as a consultant pharmacist for NightWatch LLC., providing pharmacotherapy management, order processing, and kinetic services for several hospitals.

Jesse’s martial arts training originally began with taekwondo while in high school, practicing with his father and brother. After enrolling at Butler University in 2002, he began his karate practice at the SKA dojo there, lead by John Teramoto and Brad Markisohn. He served as the captain of the Butler club while he was a student and continued practicing there as a community member once he had graduated. After living in Michigan for a few years and practicing independently, Jesse moved to Birch Bay in 2013.